I’ll rush into the best news that my team has heard in a while: City Year at Markham Middle School has been sponsored by OneWest Bank for THREE YEARS! Likewise, OneWest, a Southern California based bank, is sponsoring the other programs at Markham. After we get “OneWest Bank” embroidered on our bomber jackets, we will officially be the OneWest team at Markham Middle School! The sponsorship entails $100,000 a year for Markham.

City Year Los Angeles’ Development Director, Erin Ross, personally told us the good news on Friday. This is the first sponsorship that City Year has taken part in since the economic downturn and also one of the longest commitments. Erin told us that OneWest asked her what the highest need school was in all of the schools CYLA serves in, which is Markham, hands down.

I’m not trying to boast about how hard my school is or any of that nonsense, but the reality is we have NO resources at our school: no whiteboard markers, no sports equipment, no printers, minimal computers, no bandaids, etc. There isn’t even enough ink and paper for teachers to make copies. The only abundance of any supplies our school has is butcher paper, no joke. Granted, I’m not sure what it’s like at other schools, but I can say we (and everyone who works at the school) definitely struggle at Markham.

Erin said that this action taken by OneWest is straight-up philanthropy and none of that social corporate responsibility junk. The company is investing in Markham to truly see changes in Los Angeles, not to just be able to write on pamphlets and mention that it donates to inner-city children.

Our reactions to the news were priceless. I really wish I caught it on camera or video, but I was in the same state of shock as the rest of my team. We are so stoked and will take ANY help we can get for Markham. All of our mouthes were literally wide open in disbelief that what Erin was telling us was really real.

I’m not positive if we will even be affected by the sponsorship since we only have three months left at Markham, but we’ve come this far with limited resources so we can keep going. My team and I discussed this at happy hour on Friday (of course we had to celebrate!) and we see ourselves a just the foundational team at Markham. We may have not been able to do everything other CY schools do, but we struggled through this year and paved the road for next year’s team. We started the Markham legacy. Our team unity, love and perseverance to keep going at this school even after the hardest days shows next year’s team they can do everything we did and do even more.

My teammates and I have had conversations lately about whether or not City Year will be invited back to Markham next year because our student’s test scores are unlikely to go up due to a multitude of factors. However, because CYLA decided that this sponsorship should go to Markham indicates that at least CYLA believes we’ll be back next year. If so, this three year sponsorship means that my students will have City Year on campus until they are in 8th grade. And honestly, I don’t even care about academics at this point, especially with my girls. Even if a CY isn’t in their classrooms next year, if they remember the relationship they had with me, then I know they will at least befriend the next City Years. They still need a mentor to talk to and someone, like me, who will give them a blunt reality check when needed.

I had to give my girl students their first reality check about drugs and alcohol this week. I told them I know the they’re going to run into it sooner than later and they likely WILL try it, but they have to be smart about it (ex: don’t be stupid and do anything on campus like other students may do). That’s better than telling them that they should never ever do it and it’s a horrible thing to do; when people hear things like that it makes them rebel even more.

This talk I had with my students seriously wanted to make me cry. In the beginning of the year, they were these shy, innocent, cute girls. Now all they do is cuss each other out and talk back to everyone without a care in the world. I was talking to my dad about this and how much I think the school atmosphere has corrupted my students, but then my dad gave ME a reality check. He told me that I was swearing by the 6th grade and doing everything my students are doing. Now that I think about it, I did get sent to the office multiple times in middle school and I remember flipping off a teacher in 7th grade…

So, I guess that’s just a part of growing up. You could go to Markham or Cunha, my small town middle school, and still exhibit similar behaviors. Right now, I’m giving myself a reality check: although I’ve seen my students change so much since the beginning of the year, I still love them as much as when I met them. They still crack me up and make every day worth going back to Markham. I also have to be grateful that although my students are sassy, none of them have fought this year and I hope it stays that way.

It was Markham’s turn to host pueblo Friday, which means we cooked breakfast for the rest of the South Los Angeles schools and performed an interactive skit that embraced all City Year values. 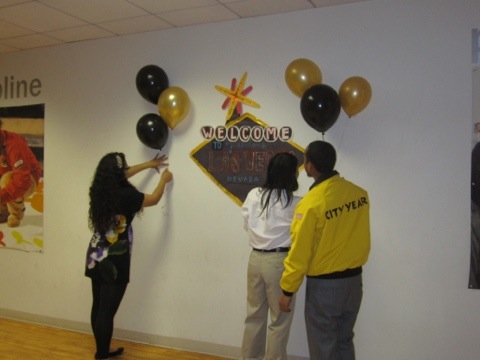 Setting up for Friday breakfast hosted by our team; theme: Markham in Vegas 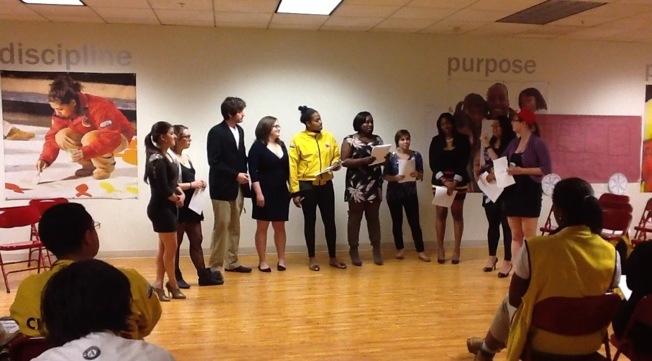