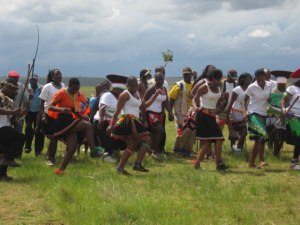 Whenever a guy proposes to me here I respond with, “30 cows”. Then they laugh and tell me that’s far too much, because the average price for a bride here is 12 cows. (How many cows do you think you’re worth?)

Traditionally in South Africa, after a man proposes to a woman, he must negotiate “lobola” with the bride’s family. Lobola is a practice where the bride and groom’s fathers, or other men in their families, meet to discuss how much the man will have to pay to marry the woman.

The average arranged payment is 12 cows and each cow costs around 1,500R (~$200USD). The price is lowered by one cow per each child the bride has given birth to before marriage. Nowadays the negotiation process is a little more modern, and the groom can pay in cash or split it between cash and cows. The negotiations must be done by men from both families, or else it is a disgrace to the ancestors. Once the negotiations are settled, the plans for the actual wedding plans start forming.

Zulu weddings last three days. On the first day of ceremonies, the groom’s family travels to the bride’s family’s household to partake in a traditional ceremony. All men and women are dressed in Zulu traditional dress. Women wear an isidwaba (wrap around beaded and pleaded skirt), beads, and an isicholo – a straw hat that is beaded. Men wear amabheshu – a cow skin cover-up and carry a Zulu shield, also made out of cow skin.

The two separate families gather together and watch each one march and sing around the household property. This is the beginning of a friendly “competition” between the families. The families then will march to wherever the groom or bride is and sing for them to come out of the house and join them. Once both families have gathered either the groom or bride, they sing and march out to a larger grass field.

The bride’s family, with the bride in the middle of the group, then sings and dances traditional songs – songs about marriage and love, many of which do not have direct translations to English.

After about 30 minutes of dancing and singing, the bride’s family stops and the groom’s family begins. Once both sides have completed, they will do the gita – a traditional Zulu dance when one kicks his or her leg to the beat of a drum or song as high as they can in the air and maintain balance. The families spend anywhere from a couple of weeks to a week to prepare and practice the choreographed dancing and singing before the big day.

About an hour or so later, they gather and march together back to the family compound to eat a traditional meal. The area is set up as it is at any American wedding reception – tables gathered around a long table for the groom, bride, bridesmaids and groomsmen amongst a backdrop of decorative cheetah fabric. The day ends in lots of socializing and drinking umqombothi (Zulu beer). 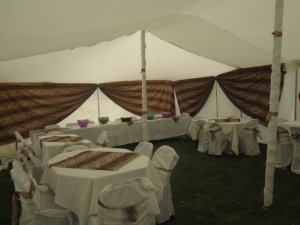 The next day is the Westernized wedding ceremony in a church. The ceremony is pretty much the same as an American wedding, sans the extra loud African music, yelling and cheering and dancing. The wedding has a colored theme – for example, purple and silver. All the guests are expected to wear that color combination (although many don’t) and the bridesmaids and groomsmen are dressed in those colors. The dresses are handmade and ruffled as if came from a time machine straight from the 1980s. The bride wears a white dress and the groom wears a tux. 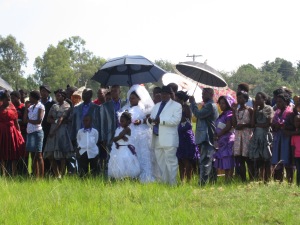 After the Western wedding ceremony, the guests and families head back to the groom’s house – where the bride will be staying from then on. As soon as both families arrive on the property they sing and march outside the property. They compete with the same songs and dances that sang the day before, but they are dressed in the wedding garb from the church. This time the dancing and singing lasts a little longer because a few other rituals take place.

The men of the community ask the ancestors for peace that the couple unites by first kneeling in silence and then traditional dancing. This ritual lasts about 10-15 minutes and once the union of families is approved they jump around and celebrate with both sides of the families. After, the mama’s of the community – who wear the same dress (which, may I add, my mama sewed and wore), stand in a line in front of both families. The women sweep the air with an “umshanelo wotshani” – a broom made out of grass to cleanse the bride’s new home for her. This signifies that they are welcoming the new mama into the community. To show their respect and welcome, they later serve food and clean up after the reception. 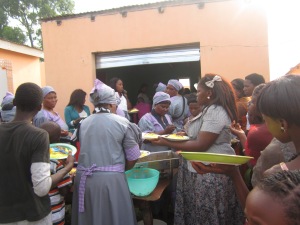 Once the dancing and singing is over, the families unite and march into the property together for food and drinks. The groom’s family takes the bride and her family on a small tour of the property to show her where she will be staying (this is just traditional, because many brides have already started living at the groom’s before the marriage). The bride and groom receive presents – mostly household items – and cut a cake. There is usually a DJ and a dancing tent for the night so guests can dance and drink the night away.

On the last day of ceremonies, the bride gives the groom’s family gifts, which are mostly blankets for their houses and ironically usually bought with lobola money. The families gather around, open each individual blanket, and invite a family member from the groom’s side to lay under it for 30 seconds or so. This is another welcoming gesture that groom’s family into the mother’s care and new household. 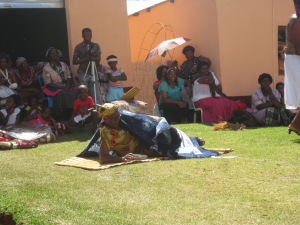 Anybody in the village is invited to all the ceremonies because of the Ubuntu mentality here, so the families have to estimate how much food they’ll need to prepare. Two cows are usually slaughtered, which is a good amount of food. However, preparation of food and decorations are another story, and it literally does take a village to help cook and prepare for any wedding. I find it absolutely awesome that although there is a little Western influence on Zulu weddings (they literally call part of it a “white wedding”), they still haven’t lost their heritage and go about weddings “the right way” to please the ancestors. And you bet they are proud of it!

To get a glimpse all the rituals discussed in this post, watch the video below: