I arrived in Atlanta for Peace Corps staging late Monday night after a delayed flight from San Francisco (the travel gods are testing my patience before the big move…) I packed two bags that each were a little less than 50 pounds. I packed mostly business casual clothing because rural South Africa places a lot of importance on professional appearance. I’ll always have the memory of my first Peace Corps panic attack about getting lost in the Atlanta airport looking for my hotel shuttle, carrying my 50 pound duffel bag on my shoulder and rolling my other luggage whispering things under my breath like, “How the hell am I going to do this? I can’t even carry my bag to the shuttle area!” Except now I learned to just move 20 pounds of stuff to my bigger bag that rolls so I don’t nearly kill myself again. I can only imagine trying to carry my luggage walking to my village when I get my site placement…

Staging is pretty much an orientation to the Peace Corps where all the Volunteers meet for the first time and sit through a bunch of presentations.Staying true to my City Year roots, I was expecting a lot of PowerPoints like we sat through every out-of-school service Fridays. However, they switched it up a little bit and this time I actually sat through a couple of paper board presentations. What a relief.

Anyways, we had to do a bunch of sharing our feelings and reflecting on why we decided to serve. Old news. I can’t count how many times I had to read a “Why I Serve” statement and write paragraphs about it during City Year Fridays. Oh, can’t forget that we were also given scenarios Peace Corps Volunteers might face abroad and make up a skit (so City Year, once again) based on how we think the PCV should respond to the situation exercising the Peace Corps core expectations.

It’s exactly what I need to be doing at this point in my life and I can’t think of anything else I’d rather be doing.

I will feel successful as a Volunteer when…

I know I have made an impact in at least one of my student’s lives.

After the expected self-reflection time, we discussed as a group our anxieties and aspirations for service.

Anxieties:
1) Learning a new language. If I’m learning isiZulu, I have to click the top of my mouth to pronounce some words…talk about challenging!
2) Not being able to blog. If I don’t have Internet service or electricity every once in a while I really will drive myself mad with not being able to publish on this site. Writing, publishing and sharing the experiences I have and life stories I hear keep me sane.
3) Sexual harassment. As a young white female, I’m really not looking forward to any unwanted attention.
4) Getting sick from a new diet. Like it or not, it’s going to happen.

Aspirations:
1) Being an effective teacher. Teaching is going to be challenging, but knowing you’re actually making a difference will be the best feeling ever.
2) Implementing strong classroom management. If students don’t respect you, how will you teach effectively? Both of these aspirations go hand-in-hand. 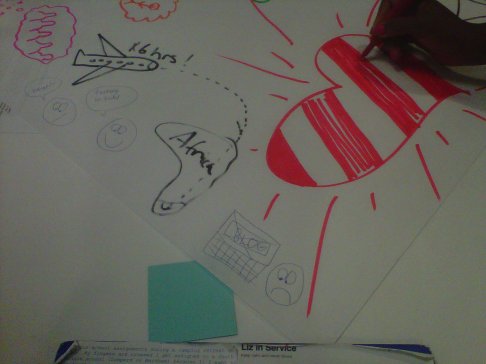 In City Year fashion, we had to draw our anxieties and aspirations as a group. The odd looking cartoon characters are mine…

After staging was done, I got dinner with many of the Volunteers of South Africa 26 (the 26th group to go to South Africa) at a restaurant that is owned by someone who used to live in Durban, which is a major city in the Kwa-Zulu Natal province where some of us will be serving. He can even speak isiZulu. Small world!

There’s a good amount of us newly graduated youngin’s — 22-23-years-old — but I was surprised there weren’t more. It seems like most of the Volunteers are 26-28-years-old, which I guess makes sense because the average PCV age is 28-years-old. There are two married couples in my group and a couple of senior Volunteers (60-years-old and older). Everyone is great, friendly and easy to talk to so I have no doubt I’ll be able to make friends easily. I even got to talk it up with a fellow City Year Los Angeles alum who served in Watts in the 2009-2009 corps year! Yet again, it’s a small world.

Our facilitators today told us to get used to each other because we’re each other’s new family. As I know from experience, people click easily in these types of service organizations because everyone has similar values and aspirations. When we’re around each other we don’t have to explain what we’re doing, what the Peace Corps is and why we decided to do it. We just get to enjoy each other’s company and that’s that!

Tonight is my last night in America. Already said my goodbyes, which of course was hard, but there’s no way around it because tomorrow I will be on a flight to Johannesburg! I still don’t really believe it’s happening. The next time I’ll step foot on American soil will be in September 2014…

July 12, 2012
5:30pm- Arrive in Johannesburg and meet Peace Corps country staff at the airport
Shortly after- Hop on a cold, three hour bus ride to Ndebele College of Education in Siyabuswa, which is located in the Mpumalanga province.

We will be in Siyabuswa for about a week living in college dormitories and then we will be assigned our host family who will help integrate us into South African culture by teaching us about things such as food, daily life, cultural values, etc. From there on, I really don’t know what else happens except we get intensive language and teaching training until September when we will be sworn in as official PCVs.

Yours back in service,
Miss Warden

Expect to not hear much from me these next three months — IF I have access to Internet it will be very limited and I might not be able to blog. I’m already having withdrawals. As my current country music says, “That’s the way it is, you gotta roll with the punches. That’s the way it goes, you gotta bend when the wind blows…”