One of my co-workers, who works at the feeder elementary school to Markham, has a 3rd grade student in her class who recently lost her 22-year-old brother. The student’s brother, Arturo, was shot by sheriffs eight times in the back. The LA Times hasn’t reported much, which isn’t surprising because South LA, especially Watts, is neglected in mainstream media.

On Sunday, my teammate Charlotte and I ventured out to Watts to meet one of my students at his dad’s street carnitas cart (if you are wondering what carnitas are, they’re pig stomach. And yes, I ate it; I’m preparing myself for all the odd things I will have to eat in the Peace Corps).

My student gave us a tour around his part of the neighborhood and his elementary school, which brought us to stumble upon a car wash and a quesadilla sale for Arturo’s family. We got my car washed and talked to Arturo’s family (and even saw some Markham students!)

I talked to his cousin for a little, giving my condolences and expressing my frustration with the situation too. Even if Arturo may have possessed a gun (as mentioned in the LAT article) and ran from the sheriffs, but if he didn’t aim it at them, does that really call for being shot in the back multiple times until he drops dead? Does anyone deserve that? Isn’t authority only supposed to shoot only if a suspect aims at them? The weird part about this whole story too is that Watts is under Los Angeles Police Department jurisdiction, not the Los Angeles County Sheriffs Department. I hate how unjust society can be. I don’t even care if he was part of a gang or not; we’re all humans.

With that said, what gets to me the most about any community violence like this is that a City Year student – whether he or she attends one of the two elementary schools in the area or Markham – is always affected by it. My co-worker’s 3rd grade student lost her big brother. Can you even imagine dealing with something like this at that age?

“We can’t get sad about this kind of stuff. We have to just celebrate the time he was part of our lives.” -Arturo’s cousin

This community sees incidents like this on the regular. Although sometimes it does ignite more gang violence and revenge, most of the time there are humble people like this family. They are still proud of who they are and who they’ve known in their family – dead or alive. They come together for a common purpose. And that’s the beauty of Watts.

I’ve found out that Arturo was an uncle of one of the 8th grade Markham students we know. He said they raised A LOT of money selling quesadillas and washing cars Friday-Sunday for the memorial service. Not only did Arturo have a 3rd grade baby sister, but he also had a two month old son. The student said the Sheriffs Department has to pay for half of the funeral and the family plans to sue for justice.

“No amount of money will bring him back.” -Markham student 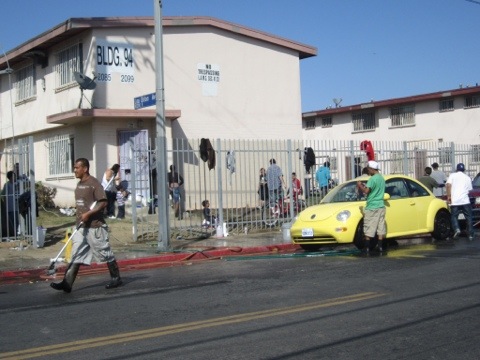