Week 19: data struggles and fighting on for next year’s CYLA corps

The sixth graders at Markham Middle School received their common assessment scores for math and English this week. After our teachers shared the data with us, I could sense frustration across the board. From what I’ve heard, not many student’s scores went up significantly; some had minimal gains (a few of my students did). Sadly, my co-teammate (who works with the same teachers as me, just different periods) compared her student’s math scores with the first assessment they took and the students either went down or stayed the same. I haven’t seen my student’s math scores yet, which makes me nervous. I have a feeling they’ll be very similar to my teammate Chariya’s students.

However, I was happy to see that some of my English students scored 4-6 out of 6 on the written portion of the assessment. The written portion of the assessment asked them to write a factual assertion and then provide one direct quote from the text that supports the assertion and a paraphrased detail that supports the assertion. My English teacher and I tried to drill this concept into our students for about two months. About a week before the exam, most students still could not explain what an assertion was. Yet, they pulled through! I think the written portion is more reflective of my students skills because they rush through multiple choice tests and guess because they’re too hyperactive. One of my top English students scored significantly lower than the teacher and I know he is capable of. I’m assuming it’s because he rushed through it.

I could go off on a tangent about how much I hate standardized tests and don’t think they reflect intelligence at all (especially because I attempted to start studying for the GRE this weekend; shoot me in the face), but I’ll save that for my mind that questions everything.

These scores don’t reflect the amazingly-well-taught English lessons my teacher has given the students or the one-on-one time I’ve spent with students in-class and out of class. I think a lot of it has to do with student motivation. Also, the students do not listen in math class. I lack a lot on the behavior management spectrum because my kids tend to boss me around and see me more as a friend than an authority figure, which is my fault (but I can’t say I don’t enjoy gossiping with my students/making fun of them!) They don’t have the passion to listen, regardless of how many times you try to drive home the point that education is important.

The weight LAUSD puts on standardized tests really makes me wonder. These scores are used in a value-added model the district and LA Times has used to evaluate teachers. Is that really fair? I’m in my English teacher’s classroom everyday and everyday see how great of a teacher she is. So, because all of her students scored far below basic, below basic or basic, does that say she’s a bad teacher? I’d hope not! Education reform is interesting and there’s a lot I don’t agree with, but it’s so hard to find other alternatives that will work. It’s seriously like a 1,000 piece puzzle, which is why it’s so riveting to discuss and think about. I just signed up to attend an event on Wednesday, Feb.15 hosted by Michelle Rhee’s organization StudentsFirst and Mayor Antonio Villaraigosa. I’ll get to hear all about education reform in Los Angeles. Oh so exciting.

Last semester at SC, I got to approve and edit comments for the LATimes value-added teacher evaluation project. Therefore, I got to read most of the teacher comments before they were published and also sent e-mails to teachers that allowed them to look at the data and respond to it before the Times published it. Most of the comments mentioned how the data did not measure behavioral problems in class, a student’s home life, the student’s other teachers beforehand, etc. I couldn’t argue against these comments or argue for them; I could only sit there perplexed to what in the hell are the solutions to education reform.

I could discuss for hours and hours the struggles of the public education system, but instead I’ll just still be a small solution to a bigger problem. I have finally hashed out a better schedule for student interventions. My higher students are going to start reading Esperanza Rising with me popcorn style and then I’ll throw in reading compression techniques as we go. Other than that, my students will also be working on grammar worksheets (especially verb tenses!) My other students that need more help in reading and spelling will continue doing my team leader Lauren’s English language intervention system and a phonetics reading system my team just got ahold of called Great Leaps.

Point blank: I hate data. I’m scared the Markham team isn’t going to produce high student data for City Year and the school administration, which could influence if City Year comes back to Markham next year. We’re definitely having an impact on this school, but it might not show with student scores. It’s just a whole other world at Markham, which should also be taken into consideration when our end of the year student data is released. I can’t help but worry; our students need City Year. Data, data, data, blah, blah, blah…

This week, my team also had to sit through a speed-dating type of team intervention called feedback 360. Every team member had to meet face-to-face for about three minutes and discuss the negatives and positives about each other’s behaviors and tips on how we can improve ourselves to make our team stronger. Apparently our program director was a little worried about having the Markham team go through this because we already have a very, very strong dynamic, but we killed it, took into consideration everything everyone said to us, and acted exactly as we always act with each other right after. Our team just keeps getting better and better! Guess what everyone told me? Stop stressing out, stop being hard on yourself, give yourself more credit and that they appreciate all the blog work I do for our team (that one made me pretty happy because honestly I didn’t even think my teammates read my GOOD articles). I’ll stop stressing out for my team, I promise!

On Friday, City Year hosted a “recruitment blitz day”, which means our corps members were deployed to UCLA, Cal State LA and USC. All alumni went to their former colleges, so I got to spend the day at USC with other alumni and most of my team! I enjoyed getting to show some of my teammates the campus and getting to share college stories.

The communications team shot a CY/USC promo video with alumni to encourage current students to apply to CY for next year’s corps (2012). I wasn’t in the video, but watched the production side of it (thank God. Me on camera = awkward mess). 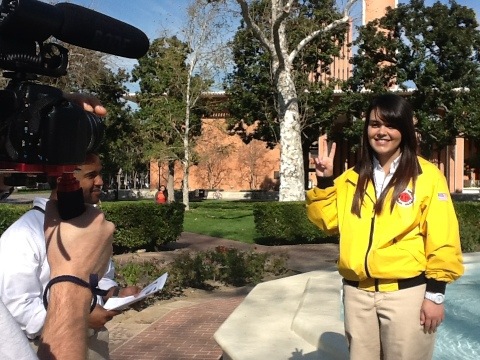 I answered a Q and A bio for the flyers CY put in envelopes for the sororities and fraternities. I never saw the final product of it, but I’m sure it was funny…

I’m starting to get all my medical work done for the Peace Corps this week so I can turn it in as soon as possible! I am also going to run every night now to get in shape because I might have to bike three or more miles to work (or perform other physical extremes) in the Peace Corps.

From the porch of Woodcraft Manor,