Week 14: the semester is seriously almost over?

Why? Ohhhh, I don’t know, maybe, just maybe because we’re all physically, emotionally and mentally drained.

Time has flown by. Was it a year ago when I met all 13 of my roommates and all 15 of my teammates? No, only just about four months ago. The relationships that have grown since then between roommates and teammates make it seem like we’ve known each other for a year or so, however.

I’m constantly around City Year people, considering I work with them and live with 13 of them. As much as I like everyone, it’ll be good to head home next week and spend time with my middle school best friends. Working in a middle school has made me appreciate that I still (and always will) have my middle school buddies. And so the countdown is on! As soon as after work on the 20th hits, I’m jumping in my car and heading back to the bay.

My students are enjoying the picture phonetics system I mentioned in last week’s post. The students who are working on that with me will practice it for 20 minutes during a period then we’ll do class work together in the library so I can help them one-on-one and it’s a quiet environment for them. They’re also able to practice reading by “popcorn” style reading. I make them read aloud and pause every paragraph. When they pause the other students have to respond back with the word the student paused on so I make sure they’re following along. Reading aloud is good practice for them and if they keep practicing hopefully their reading scores will go up. So far that has worked.

Even though my system has been working, it’s very, very frustrating. On Thursday, I took a couple of my higher focus list students out of class for a tutoring session. The first activity was to do their “do-now” and write it in their journal. The prompt was, “Explain how creating a writing system advanced the civilization of ancient Sumeria.”

I asked them what the topic sentence is. They said the main idea. Good job, my little students. Then I circled words in the prompt like “advanced”, “writing system”, and “Sumeria” and told them that I wanted all of those words in their topic sentences. They couldn’t do that. I wrote a topic sentence for them. Then we tried to brainstorm three details about why a writing system would advance ancient Sumeria society. I was pulling teeth. Not only have they been reading about this in history class, but my teacher made sure that they could answer it even without a history book.

I had the same struggles with my students after reading a nonfiction article and coming up with a main idea and two details supporting that main idea. I just don’t understand how some of this doesn’t click with my students (and it’s not just this time, it’s been like this all year). My teacher and I think that in elementary school they may have been given a lot of sentence starters for their written work, so now that they have to come up with their own sentence starters they’re struggling.

It’s hard to tutor these kids or bring try to bring them up from where they are when we can’t really even successfully get through a period of class work. It’s so hard to not get frustrated when you’re trying so hard to get the students to just “get it.” It’s hard not to get frustrated with yourself and doubt your teaching and tutoring skills.

On Tuesday, we played a kickball game of City Year vs. the students. We were team “Golden Eagles” and the students were team “Dynamite.” We painted war paint on the students faces to get them pumped up. They ended up cheering for each other in unison. It was probably the cutest thing ever. Ironically, the students almost beat us, even though we thought we would school them. 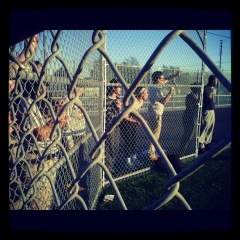 Sunday dinner at The Manor is back in action and tonight we have 13 out of the 14 roommates attending. I’d have to say that’s the most successful it’s been all year!

My roommate and teammate Marissa and I found a stray dog outside of our school on the way to the train station after work. The dog literally has a cement collar on and almost couldn’t breathe. I know we’re told to not mess around with strays in Watts, but how could we let that poor thing choke to death? We waited until animal services came and got the dog (we named it Edwin after our school). If only we could have taken it to the vet and then made it our house dog! As we were waiting for animal services to come, a helicopter was flying over our school and the grocery plaza with its search lights on saying on the loud speaker, “We know where you are, the dog will find you. You can’t hide.” If school was still in session that probably would have been a lockdown situation. Oh, there’s never a dull moment; we’ve become accustomed to expecting the unexpected.