One 45-minute bus ride got Daniel Pierson’s mind rolling about how he can help others and be an advocate for those he know can succeed. During their sophomore year of high school, Pierson was heading over to a Mariners baseball game with a friend, Michael, who shared a common interest of sports. The small-talk on the bus wasn’t just about whom they thought would win the game, but lead into the troubles Michael was having at school and home.

His father had passed when he was younger and since he was 13-years-old he had been living on his own and started to follow the path of some at-risk dropouts: abusing drugs and disregarding school.”I started helping him with his homework a lot and trying to get him to do well in school,” Pierson said.”I kind of realized that not everyone has such supportive parents and so many people advocating for them like I did.” 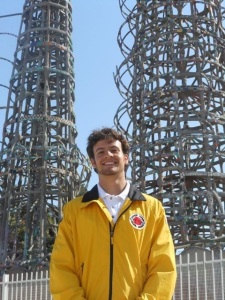 The next three years Pierson was Michael’s advocate. He later graduated high school alongside him. Today, he serves as an AmeriCorps member with City Year and says he’s an advocate for his 6th grade English and math class and the rest of the students at Markham Middle School in Watts.

City Year focuses on getting to know the student on a personal and academic level, inside and outside of the classroom, which Pierson was able to do with Michael.

“We’re in a unique position because we get to see different aspects of the kid’s lives” he said.

Pierson hails from Seattle, Washington and recently graduated from Western Washington University. He joined City Year after he talked to a recruiter at a job fair on his college campus. He had a “gut feeling” that City Year was the right program for him.”I hadn’t had felt that instant connection to anything before. It was a call to action in a sense that I was needed in LA,” he said. Pierson attended public schools in north Seattle throughout his childhood. He believes in the power of the public school system and that all students – regardless of where they live – can succeed if they are motivated. Or, as Pierson and the Markham Middle School team would chant, based on the school’s mascot, the eagle, “soaring, so high!”

He’s challenging himself this year to give his students similar stability that his parents gave him when he was in middle school.”For students who are inherently motivated, it doesn’t matter what school they attend, they’ll succeed anyways,” Pierson said.”Maybe for those kids who don’t have a support system … it may be really hard for [them] to be self-motivated.”

Pierson knows that he will stay within the education sector after his City Year to still advocate and be a positive role model for all those students that he wasn’t able to meet and impact during his year of service. Although he doesn’t have specific plans, he’ll know when the time is right to act on his next move in education because he’ll get the same gut feeling he got when he applied to City Year.

“It’s about laying perfect bricks,” he said. “Obviously we’re not going to create monumental change in a day, week, or even a month, but what I try to do through every interaction I have with the kids or the community members I meet is bring positive energy.”