Week seven: if it bleeds, should it lead?

Today, my first post for good.is was published. The theme of it was the conflict-driven education story told in the mainstream media and my transition from that to actually working in a classroom first-hand. I’ll be writing monthly for good.is. My stories will be due the 1st of every month. A CYNY corps member will have a deadline on the 15th of every month. The series is called “A City Education” – so definitely check it out!

The theme of this post made me think of the other concept we’re taught so often in j-school, aside from the several news values: If it bleeds, it leads. Broadcast is caught in this trap more than print, but if a story features an intense crime, it automatically attracts the human interest value of a news story and will be placed at the top of the news hour or on the front page. Humans are social beings. They gossip – especially when it’s about something so atrocious that “they can’t believe that happened.”

Naturally, I gossiped with my friends back home about how crazy this week was because we had our fourth lockdown (we’ve decided to keep tally of lockdowns). This time the lockdown lasted for 2 1/2 hours. My friends responses ranged from, “The worst thing that happened in middle school for us was like two of our friends stealing from a gift shop on Main Street” (gotta love small town problems). Another said, “Wow, you’re on the frontlines of reality.”

After we heard a helicopter flying over our campus over and over again last Wednesday, we knew it was going to be serious. Luckily, most of the corps members that work in sixth grade were on break and got to just relax in the CY room instead of trying to control restless students that sometimes try to leave the classroom during a lockdown.

A few minutes later we saw a couple of cops casually walk by the CY room. Oh, I forgot to add: They were carrying what looked like 8-inch guns.

The story behind this intense lockdown was that a suspect that shot or murdered someone close by fled to our campus. He jumped the fence to hide his gun. Then, he ran from the police on campus again and they found him in a house a couple of blocks over from our campus. A SWAT team bordered the house and forced him out. The police and police dogs found the gun and our campus was back to being good ol’ Markham after that. The lockdown went past school hours, so each teacher had to escort the students to the front of the school and the ones that usually walk or bus home had to wait in the library for someone to come get them. We still got in about 30 minutes of our after-school program. We played some fun and interactive games to get the kid’s minds off of what had just happened.

WAIT, WHAT? THAT ACTUALLY HAPPENED?

I found myself focusing more on the crime in this story by telling my friends about it, but understanding that it’s not just about the human-interest theme in a story like this. It’s what these students have dealt with their whole lives. Therefore, we have to understand that even if a student won’t do work or listen in class, there are millions of other things running through his or her mind that can even relate to incidents like this or last week’s gang shooting. Anyways, shouldn’t that be the real story? Not the quick and easy crime story?

The team debrief after the lockdown summed up to this: This is just another STRONG reason why we’re needed at Markham.

On Monday, there was a sub in my English class who proceeded to send both of my trouble students to the counseling office. The first student hit another student in class because the student “told the whole class that he had a girlfriend when he told him not to tell anyone.” The sub told him she was writing him up, so he decided to cuss, throw his book to the front of the room and storm out of the classroom.

I found him in the principal’s office and couldn’t help but laugh after he told me it was over students talking about how he had a girlfriend. Wait for it: This little 6th graders girlfriend is in the 7th grade. That killed me. I just said, “Why are you embarrassed that you got a girl? You should be showin’ that off! AND she’s in the 7th grade?!”

Instead of sending him to the counselor, the principal just made him hang out with him the rest of the day, which I think was a very good response to what had happened. This student doesn’t need more people yelling at him, just someone who’s there to listen and have a LOGICAL conversation where adults aren’t raising their voice when dealing with him. The principal knows this student and treats him like an equal and respects him. The student responds well to this and gets himself together when people talk WITH him and not DOWN to him.

The next day he gave me a hug in first period and said, “Thanks for supporting me yesterday.” He doesn’t have much of a soft-spot, so this really got to me. He sees that I do care about him and like him still – no matter how much trouble he can cause. I’m coming up with an accountability/discipline plan for him tonight that will have incentives. I will get through to this kid if it’s the last thing I do because I KNOW he’s smart and could do something if he tried and didn’t ditch class (side note: we were cracking up about this the other day, what is there even to do when you ditch class in middle school? Chill behind a wall? C’mon kids…)

Onto the tutoring portion of the week, I’m putting my feelers out for how to work with one of my students who has a really, really hard time spelling. He comes up with great ideas, has awesome reading comprehension, but when it comes to spelling… it’s another world. He can speak sentences that construct a coherent paragraph, but can’t correlate that down into writing.

What I’ve decided to do with him is have him speak aloud what he wants to write. Then I’ll type it in my blackberry and then I’ll tell him what to write exactly based on what he said. We’ll construct a paragraph together, but I won’t tell him how to spell anything. Then, I’ll go over the paragraph, sound out words for him (Os, Us, Is and Es are death to sounding out the English language – they’re so similar!)

After that, I’ll make a list of the words he got wrong and next week I’ll give him a spelling test on those words. We’ll continue doing this every week. This student really wants to learn, but I’m not sure if he has a learning disability because he can’t connect his spoken word to written word ever. He also has a really strong vocabulary, but just can’t spell a lot of the words he knows. I hope we can really improve his spelling this year. If we can, I know for a fact he’ll be a really good writer in the years to come.

It’s our team leader Brittany’s birthday tomorrow. We had a surprise potluck for her on Thursday during our meeting period because she’s taking the day off on her actual birthday. We decorated the room and all wore black headbands to mimic her every day hairstyle: A black headband with a high bun. Although Brit was sick and had to leave mid-surprise party, it’s still the thought that counts. We wanted to appreciate her for all the work she does for us and for being honestly the best TL out there (and Lauren!) We’ll have to be creative to think of the next surprise for our other TL – Lauren’s – birthday and our PM D-man.

To end off the longest post yet, we had a service day at Markham on Saturday with the Boys and Girls Club. We helped build a community garden for the students! It was great to see some other corps members who don’t serve at Markham, but still came to support. 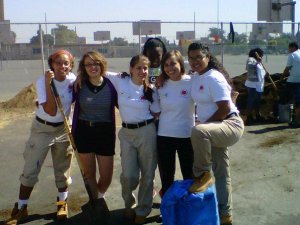 Oh, is anybody willing to donate to the “Liz Needs a New Laptop Fund?” Living on a ~$1,000 a month stipend is rough.

My laptop, Bumper, who has been through everything with me from freshman year on is on his last life. I’ve dropped him too many times during my frantic moments that his screen now won’t stand-up straight. Now, he’s a little tablet. It’ll cost more money to fix my computer than buy a new one, so I either settle for ANOTHER PC, or use my Apple credit card to buy an iPad. I might as well buy an iPad since I’m already working on a tablet.

How am I expected to keep writing this year if little Bumper won’t even cooperate with me? RIP Bumper, I’ll always love you.

Tonight some of the roommates and I are going to carve pumpkins. Well, that is if our food stamps cover buying pumpkins…

Bryan Brown (BTWICE), one of my roommates and our creative house chef, is making Sunday night dinner tonight for the 13 person house. He started prepping at noon. I can smell it from upstairs. Yum, can’t wait!