Week four: A month of drastic change; the beginning of finding myself through service

A month of service is done and gone. Better yet: October means the end of baseball season. Maybe, just maybe that means the girls in my house will get the TV a little more often.

WRONG. It’s football season now, which takes over our living room. Then basketball season. Then baseball again. It’s the never ending cycle of sports. My roommate Bryan (the one guy in the house that doesn’t care about sports) and I once were brave enough to change the channel from Sports Center to BBC when we were eating breakfast. With our luck, of course, all we got was the British version of a Sports Center. That’s when we came to the stark realization that we just can’t win the fight. #loosing

That’s just one of the things I’ve learned to get used to during this first month of service, among others.

One thing I’ve been thinking about a lot is that not everybody I know is going to care about what I am doing with this program. Not everyone is going to understand the importance of it, the community I work in or City Year culture.

As important as City Year, my students and my team are to me, people who have no idea what City Year might not understand. I can say that more than half of the people I know don’t even know what I’m doing. I don’t even think my mom knows what I’m doing – all she thinks is “Liz works.”

I wouldn’t say my support system is weak, because for those that understand the work my team and I are doing are all behind it. But, I would say that what I’ve realized is that if someone I care about isn’t there to cheerlead me on to really make an impact in this world – something I feel so strongly about – then I’m not going to invest my time in making them know about my CY life/service-oriented life.

I feel that already within a month I have become a much stronger person in this sense. I have a strong personality and I’m proud of that because I’m different. I know in the end I’m going to need this out-there personality to get through the toughest of times at Markham and later with my PC service. I’m done with caring about what people think. Now I see myself only as an asset to Watts – and my community abroad (wherever that is going to be) that is there to get work done. I’m now strictly the girl that has a thick mind and loving heart to help others. In summary, I’m proud of who I am and what I am doing. I’m my own cheerleader. (Hence: listening to Lady Gaga “Born This Way” — I’m on the right track, baby I was born this way).

YOU CAN DO ANYTHING YOU SET YOUR MIND TO! SKY IS THE LIMIT! 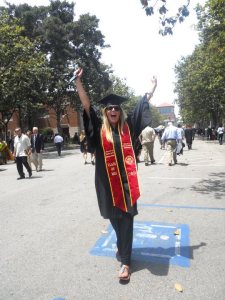 This is one of my best friends, Mary, at her USC graduation! Jokes on jokes. Jessica finally uploaded pictures from MY graduation (Mary’s wearing my cap and gown) and it’s a just a reminder of the support I’ll have at home, always and no matter what. Especially when my childhood best friend (above) calls me during graduation, tells me to look in the audience and I see her waving at me…with no idea that she was coming. She flew from SF to LA the morning of to surprise me. Now that’s what I call a solid support system!

Now onto the school week…

Within a week, there were two lockdowns at Markham. When it’s dangerous to be outside (we usually can predict when there will be a lockdown because helicopters are flying over the school looking for someone), someone gets on the intercom and says, “THE TITLE ONE OFFICE IS NOW CLOSED.” That means nobody can leave the classroom and all kids must get inside a building until they say on the loudspeaker again, “THE TITLE ONE OFFICE IS NOW OPEN.” The kids act like it’s nothing and #justanotherday (my typical Twitter hashtag). They must deal with stuff like this all the time if it doesn’t scare them at all. Reality.

I got a huge curveball thrown at me by the Markham administration last week because they switched five of my definite focus list students out of my class and into another class. Reason being, they’re putting students on “tracks” – so my below basic students (the ones that are reading / writing at a 3rd grade reading level when they should be at a 6th grade reading level) are in the lower track class now and I’m now working in a somewhat medium track class. This is frustrating because 1) I have no idea what kids should be on my focus list now (the ones that are still in the class I wasn’t even considering for a focus list) and I need to know by Oct. 14th. 2) The kids who got switched were really sad – one was bawling – because they didn’t want to leave their friends and me. The good thing is that these students are part of our after school program so I’ll still get to work with them, but I’m still going to miss not having them in class because three of them crack me up every day. Now I have to rework my focus list with my English and math teacher next week and start from scratch basically.

I had to take a half day on Wednesday to go to the doctors (yes, I’ve ALREADY gotten sick), so when I got to school at 12 p.m., my students ran up to me and were asking where I was and telling me that they missed me. Apparently they had been asking the other corps members where I was, which is adorable and makes me so happy that they actually do like me!

However, I struck out with one student. He was my focus student for working on behavioral issues. When this student actually does his work, it’s usually right and he is pretty eloquent for his age. He can read and write English well and probably shouldn’t even be in ESL anymore. There’s definitely something going on at home with him though because he always uses examples in class of how loved ones always get killed and somehow relates it to every class discussion. He’s known around the administration because he’s notorious for being the class clown, screwing around and cussing out the teachers.

On Wednesday, my English teacher wrote him up and sent him to the counseling office for swearing in class and talking back to her. She said that he needed to be switched from her class. The minute the counselor saw him he told him that he was going to suspend him and make him switch schools. If that went through, he’ll now be going to the other middle school in Watts, Samuel Gompers Middle School.

I don’t understand how throwing a student in another school is really going to help him fix his behavioral issues. I had a long talk with him in the counseling office while he was waiting to be seen and asked him why he disrespects his teachers, but doesn’t disrespect me. His response was that because I’m more like a friend than a teacher and the teachers are ______. I tried to get the point across to him that I’m way older than him and if he has the courtesy to respect me, he should also respect other adults. I told him that if he comes back to the class that whenever he gets really angry at the teacher and needs to take a breather, I will take him outside, walk him around the campus and just let him vent. That’s what kids need. They don’t need someone telling them what’s wrong all the time or yelling at them. I promised him I would never yell at him and only listen. I shared with him all the stories I had from middle school about cussing at teachers, flipping them off in front of the whole class, etc. and how it got me nowhere. I hope it got through to him somewhat that a lot of people – regardless of where they come from – have similar issues in school. I don’t know what’s going to happen to the student, but I hope I do get to know. I was starting to create a good relationship with him. Maybe he wouldn’t do what I told him to do or take my advice, but at least he would listen, not interrupt me and engage in a conversation with me. It kills me because students like him have such potential if they tried harder. But really, if you think about it, is a 12-year-old student really going to follow an adult’s advice? No. Ninety-eight percent of middle schoolers are SO stubborn (made up statistic…but you get the picture).

We started our after school program last week, which has been successful so far, but we really have to work out all the kinks. Most of my students that need the most help joined the program, so I’ll be able to work one-on-one with them even more during homework help time. On Monday, Wednesday and Thursday, our after school program focuses mostly on tutoring and homework help. On Tuesdays, which are minimum days for the students, we have clubs. I’m going to help run the sports club with a couple of my teammates. I got my dad to mail me my two softball gloves because one of my girls loves playing softball. Loves it!

Gotta roll with the punches. Flexibility is KEY when doing service work, whether you’re an AmeriCorps or Peace Corps volunteer.

I SUBMITTED MY PEACE CORPS APP!! It’s all done and the next step is the interview probably this month. Let’s hope I can make it through this grueling year-long application process. If so, I should be leaving for abroad next Oct. or Nov.!

By the way, for all you HMBeezy’s, one of my students reminds me of Frankie SO MUCH (in every literal sense possible) and even looks like a little version of him. This student has me crying in laughter every single day, partly because he says hilarious things and also because how he acts is like a shadow of our Frankie Garcia. It’s great.

Opening day is next Friday at City Hall. Mayor Tony and LAUSD Supt. John Deasy will be speaking. I used to cover both of them for journalism and now I’m basically working for them. Funny how things work out.

The Markham team is in the front on the side of the steps of City Hall. I’m literally right in front of the audience. And I have to perform physical training right in front of somebody. I already have social anxiety. Please put me in the back.

Yours in service,
Liz